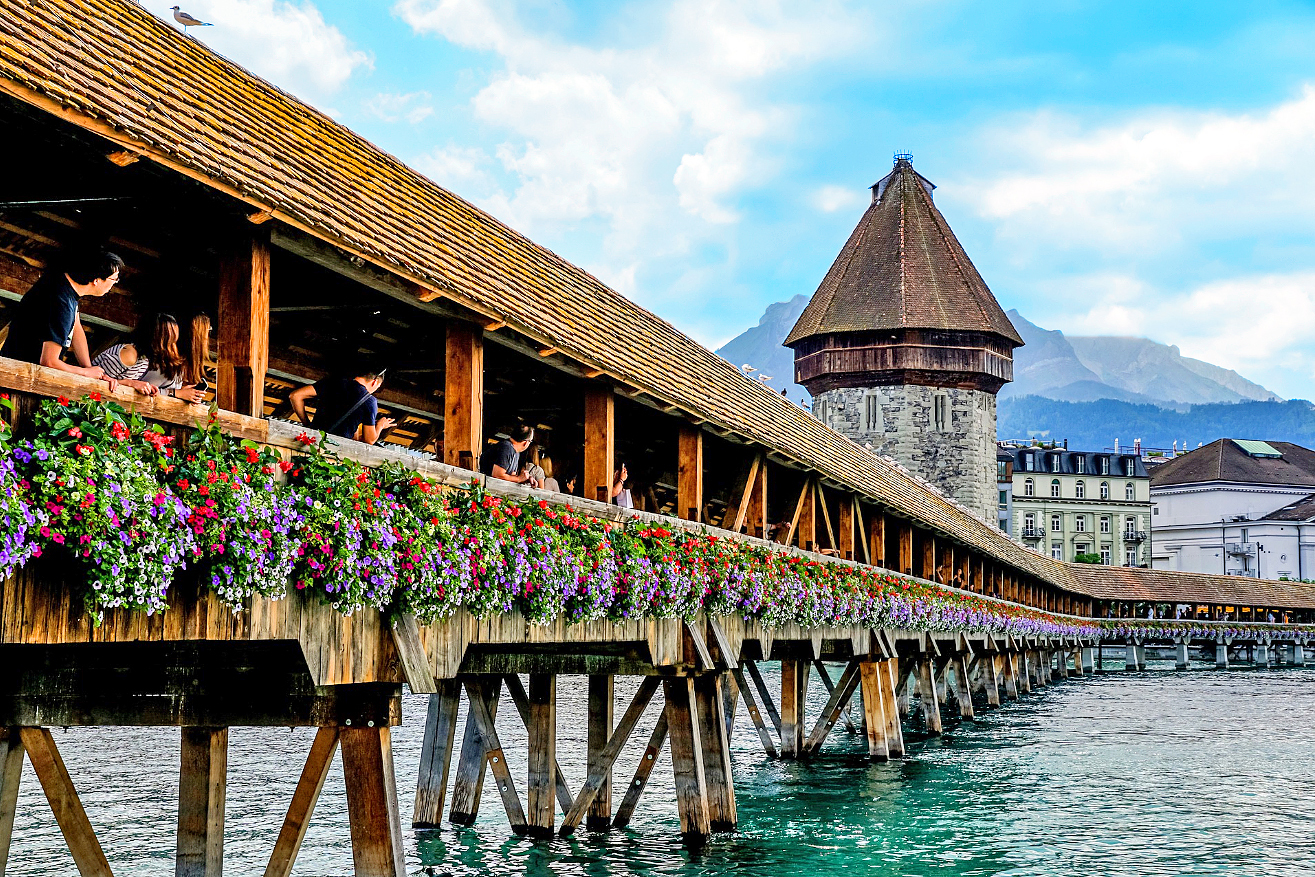 In the heart of Switzerland you find one of the most beloved excursion destinations of the country. The region stands for pure Swiss history, which you can experience on the meadow of the Rütli and the Museum of the Swiss Pact in Schwyz. Lucerne is acclaimed as the Pearl of the Lake of Lucerne (Vierwaldstättersee). The ideal starting point for excursions in the Alps is the UNESCO Biosphere Entlebuch or with the biggest fresh water fleet of Europe on the Lake of Lucerne. Come and discover with us the region of William Tell, the lakes and the surrounding mountains!

Lucerne -  The city of the little lights

“When I went to my room and I opened the window, I was literally blinded and shaken by the beauty of this water, these mountains and this sky.” Léon Tolstoy (1828-1910) at his arrival in hotel Schweizerhof in Lucerne.

The picturesque old town makes Lucerne something extra special. The landmark of the town is the wooden chapel bridge and the water tower. The sumptuous houses on the river Reuss witness what an important commercial place Lucerne was for central Switzerland in its old days. They date from the late Middle Ages, from Renaissance and Baroque times. In the north, you can discover Middle Age fortifications, the Museggmauer. One of the major events of life in Lucerne is carnival.

The Rotsee lake is one of the preferred sites of the rowing world cup. The Blue Balls Festival sees world stars as much as unknown musicians. You can also hear Alpine music.And if you are a classical music lover, you will very much enjoy the Congress Center and the KKL hall where most of the concerts of the summer Lucerne Festival take place.

“Between lake and steep mountains”, the canton of Nidwald is situated between the lake of Lucerne and high mountains. The Bürgenstock is more than a mountain, it is a myth. World-renowned personalities have retired here. Louis Barthou, Konrad Adenauer, Audrey Hepburn and Sophia Loren have been charmed by this magnificent site.

Stans – Winkelried and the Confederation

In Stans, the capital of the canton, you can find some interesting historical buildings. One of the most important monuments is the one of our national hero Winkelried on the central square, the church of St-Peter and Paul and the bourgeois residences on the town hall square. In the village, discover the ancient lane of the craftsmen. The old patrician Rosenburg house is today a culinary mecca with much ambiance.The cultural highlights of Stans are the musical festival days. With a vintage car or a cable car, you can also climb up the local mountain of Stans, the Stanserhorn. It offers a breathtaking view on 100 km of the Alpine chain.

If you take off with the first turning cable car in the world to go to the paradise of glaciers of the Titlis, or if you refresh your feet in one of the many mountain lakes, Obwald offers a great variety between culture and pure nature in a unique landscape. Engelberg-Titlis, mount Pilatus and Melchsee-Frutt are the most known destinations.

Sarnen, the capital of the canton Obwald

Sarnen is situated in gentle countryside on the lake of the same name. In the center of the town, you can admire a series of historical buildings, for example the Landenberg house or the town hall, residence of the cantonal government. It’s worth a stop. Sachseln is the home of the famous saint Brother Klaus (Nicolas). He was active in Flüeli-Ranft where until today many pilgrims and people interested in culture make a stop.The masterpiece of Sachseln is the center marked by extraordinary historical residences.

Uri - In the footsteps of the Swiss national hero

Where the railway disappears in the St-Gotthard, a new touristic region is about to be born and the taxes diminish. A stop is a must.

Paths, footbridges and passes in all directions have shaped the history of the canton Uri. The bridge opening to the south and another linguistic and cultural region has left traces in architecture, food culture and the world of captivating tales and legends. Goethe and King Louis II of Bavaria have described their fascination when travelling here. Schiller, in his famous play « Wilhelm Tell », has immortalized our national hero.

The canton Uri offers an important cultural program. The baroque churches and many chapels, castles and fortified houses have been planted in many places rich in history. Art and crafts are also very present as well as a whole lively world of concerts, festivals and theatre. All around Lake Uri, a part of the lake of Lucerne, you find a paradise of opportunities for enjoyable experiences. The very appreciated hiking destination «Swiss path» takes you on some 35 km around the lake (from the Rütli to Brunnen). To friends of nature, the mountain agriculture offers an intact alpine flora. The authentic natural products of local agriculture are a very appreciated trademark.

The valley of Ursenen with the town of Andermatt in its center, but also Hospental and the Realp, count among the regions with the biggest snow falls of Switzerland. In many restaurants and inns you find local specialties next to refined creations of haute cuisine on the menu.

Schwyz - A trip in the valley of the Swiss knife

Tradition, culture, welcoming economy, openness of mind, customs, and quality of life: these are the terms, which are at home in the canton Schwyz. The capital of the canton is the city of Schwyz. The whole region is strongly marked by history with its patrician houses and churches, monasteries, the Federal Alliance letter Museum and forum of Swiss history. In the districts, culture also manifests in outstanding places like the island of Ufenau, the tower of the castle of Pfäffikon and Leutschen, the tower of Grynau and the cultural center of the dam on Lake Zurich. Einsiedeln, with its unique site of history of art at the Benedictine monastery as well as the abbey church and library, is known since antiquity as an important European pilgrim destination. Besides this, the entire region distinguishes itself with its rich and varied traditional cultural life. Let yourself be surprised by the rich history, culture.and traditions of the city of Schwyz. The central square, the town hall, the church and a great number of houses will fascinate you.