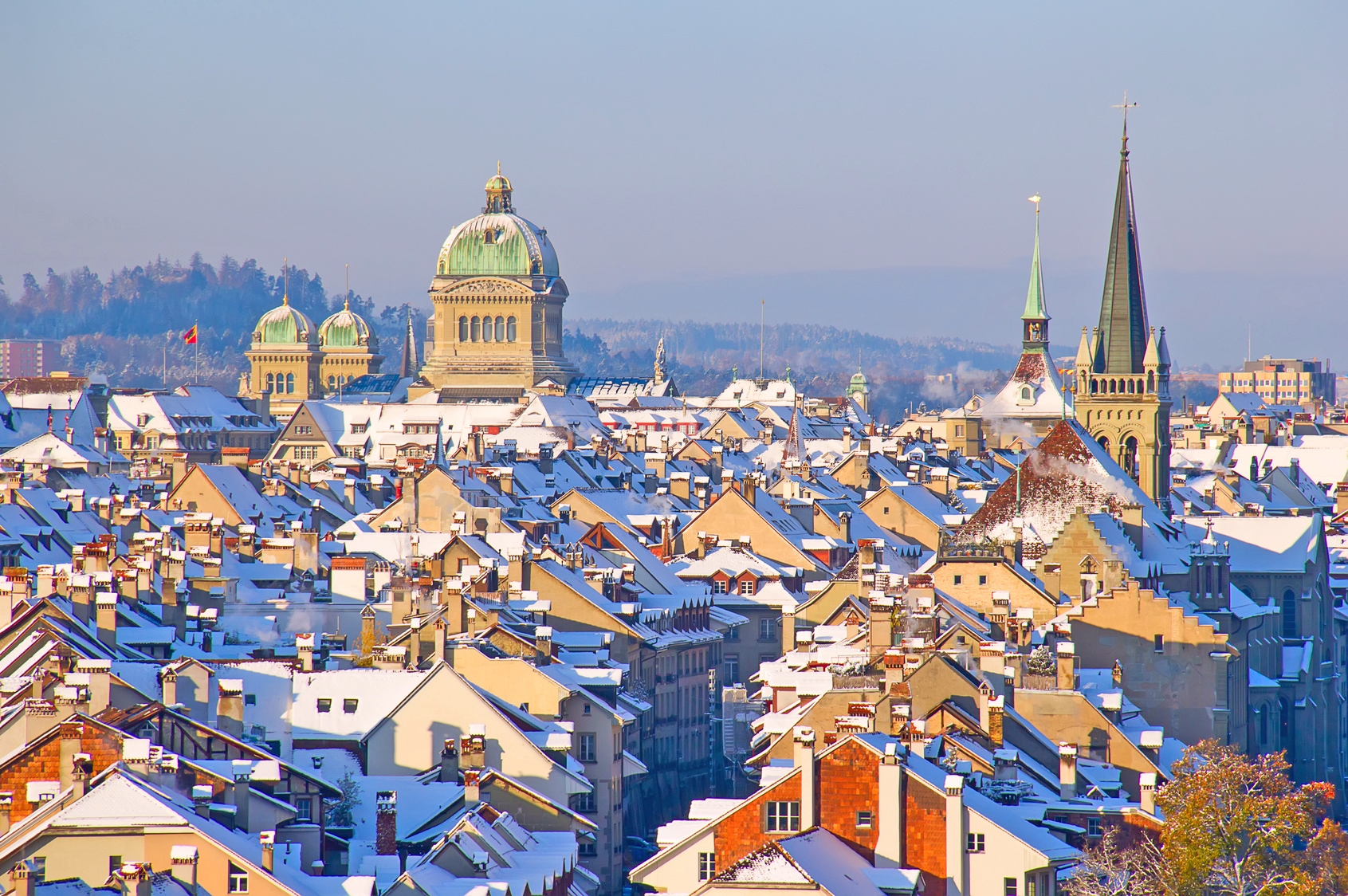 The canton of Bern is in the middle of Switzerland at the intersection of two cultures, and plays therefore an important function as a bridge between the German and French speaking parts of the country. This is one of the reasons why the city of Bern is the capital and political center of Switzerland.

The canton of Bern is Switzerland’s third biggest tourist region. It offers nature and culture of world reputation. The unique mountain world around the famous three peaks Eiger, Mönch and Jungfrau are on the UNESCO World heritage list. Piz Gloria (Schilthorn) has become a world attraction since James Bond experienced some adventures on that peak. Several spectacular mountain trains take you to many peaks. Since 1912, the Jungfrau train takes you to the highest train station of Europe at 3454 m.

Since 1983 the old town is on the UNESCO World heritage list. The alleyways are sometimes tiny and narrow, the roads sometimes large and sumptuous. The market street (Marktgasse) is tucked beneath arcades, the famous Lauben. They add up to a length of 6 km. The clock tower (Zytgloggeturm) is one of the famous monuments, and the grain-house (Kornhaus) has become a cultural center.

The late gothic cathedral tower (Münster) reaches way above the roofs of the old town into the blue sky. The magnificent houses of the mighty families and the fountains are witness of the fame of the city through past centuries when the influence of the powerful republic north of the Alps reached as far as today’s canton of Vaud.

26 fountains sprinkle the Confederation place (Bundesplatz) in front of the federal palace, the residence of our government and the two chambers of parliament. The heraldic animal of the city is the bear and the city keeps a family of them since 1513. In 2009, they were given a new park right next to the river Aare, which is wonderful to visit, especially with children.

“Those days, it was a great time to be in Bern” said Albert Einstein, who lived at the Kramgasse 49 when he discovered his famous formula about energy and matter, which brought him the Nobel Prize in Physics. Today, his ancient apartment is a little Einstein museum. But his life and work are exhaustively honored in the Historic museum.

On the other side of the Aare river you can discover the Museum of natural history. Among others, it shows the famous Saint Bernhard rescue dog Barry. Near the Ostring lies the impressive Paul Klee center, a wave shaped building conceived by Renzo Piano. The extremely popular onion market (Zibelemärit) is held every last Monday of November and is the biggest local festivity of Bern. The whole region is then in a fever of excitement.

Interlaken is another world-famous tourist center. It lies between the lake of Thun and the lake of Brienz and thus has an exceptional position. Hikers as well as mountain climbers start here, pass by Lauterbrunnen or Grindelwald, hike to the Kleine Scheidegg and climb then as high as the Jungfraujoch or the dangerous Eiger north wall.

In the town’s middle is a meadow called Höhenmatte from where an easy path leads you to a place with a splendid view on the Jungfrau massif. At the Tourist museum, mountain climbers can get vital information about the peaks they dream of climbing. Just every twelve years, a special event is held, the Unspunnen day, a festival of Alp-cowboys, which was held the first time in 1805. There is a potency competition about throwing an 82 kg stone of as far as possible. Have a try! Next time will be in 2029. On a natural theatre stage in Rugen, Schiller’s famous outdoor play “William Tell” is played every summer since 1912.

The biggest tourist village in the Jungfrau region is Grindelwald. Another lovely village is Wengen, where cars are banned. Nearby you will find Lauterbrunnen, which is close to the Staubbachfalls and 71 others.

Thun is blessed by a matchless composition of a lake and Alpine panorama. The old town is picturesque and many a delightful little path invite outings. On the rocks in the city, at the mouth of the lake where the Aare flows out, thrones the castle of Thun. Don’t miss the church of Scherzlingen, which dates from the 8th century, nor the Schadau park with it’s castle, now a restaurant and the Swiss gastronomy museum. At the Thun panorama, the world’s oldest panorama painting, you can view the region as it was in 1814.

All around the lake of Thun, discover the astonishing history of the noble dynasties in many other castles in Hilterfingen, Oberhofen, Spiez and many others. The park of castle Oberhofen is one of the most splendid gardens of the Alps. And why not make a cruise with one of the ancient steamers on the lake of Thun and the lake of Brienz? It’s such a relaxation for body and soul.